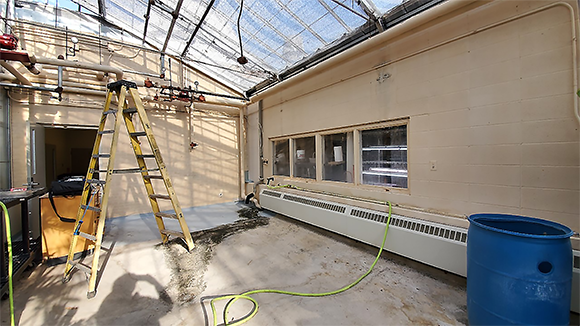 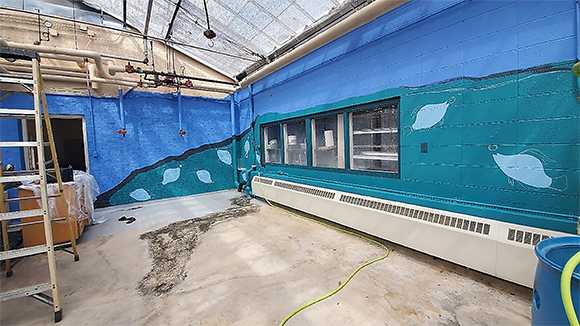 Last semester, Cayle Moreo found himself in need of a student to paint a mural within the Biology department’s greenhouse. A Master’s student by the name of Samantha Morlan decided to take it upon herself to paint this mural.

Moreo, an employee in the Biology department, is soon to be building an aquaponics system within the room where Morlan has been painting the mural. He said about the system, “As part of my job I manage the department greenhouse and over the last few years have been converting it into a center for community outreach focusing on sustainable/unconventional agriculture. About six years ago, I designed and built an aquaponics system, mostly out of spare parts, with the aim of seeing if I could get it to work. Through it is crude in nature, it has performed very well. Taking the knowledge that I have gained from that early design, I am expanding the system to become the main feature of the greenhouse. As part of this effort, I reached out to the college of Arts and Design, asking if any students would be willing to paint a mural in the room where the new aquaponics system will be located.”

Morlan, according to Moreo, is “presently seeking a degree from the College of Arts and Sciences, more specifically, from the Art & Design Department and will be getting a Master of Fine Arts in Digital Media. Her set concentration is in Digital Media, but she also likes to use other art mediums as well.”

Morlan had a lot to say about the project, as well. She said, “Sometime around January (last semester), my painting professor, Nancy Nichols-Pethick, was contacted by Cayle Moreo to see if there were any art students interested in creating a mural in the greenhouse. I was taking Nancy's graduate painting class, so she emailed me to see if I was interested. She, myself, and one other person worked on a mural together summer of 2018 in the childcare place that's in the University Apartments.

“I had also expressed interest in working on another mural, so of course I was definitely interested in working on this mural. I then started contacting Cayle to see what it was he was envisioning. He wanted the mural to be based on aquaponics and permaculture. And from there I did some research into those terms, showed him my design, got the design approved, got supplies ready and was ready to go on the mural. However, that was right when COVID really hit, so I wasn't able to work on the mural until we were officially back on campus this semester. I began actually painting the mural on August 18th. I am hoping, fingers crossed, that I'll have the mural finished by late October/early November.”

Demi Lovato 'completely done' with Max Ehrich: 'She wants nothing to do with him'

Kathie Lee Gifford: My quest for love has been unsuccessful

Morlan’s interest in art began at a young age. She said, “I guess I would say I've been into art in some shape or form my whole life, which is definitely a cliché artist thing to say but I mean it is true. My parents are both very creative people and growing up in that environment made me also want to be creative as well. I've always been an avid doodler and I've always loved drawing, however I did fall out of it for awhile throughout middle school and high school.”

When asked about her favorite mediums in which to work, Morlan answered, “I absolutely love the messiest and the most unconventional materials when making artwork. I'm a big fan of finger-painting and just really getting into your art and losing yourself in it in the process. Physical materials are always great because there's a literal physical texture that you can feel and that texture creates its own experience as is. I'm a very tactile person and to me, physical material really helps ground me in this reality.

Moreo has been more than impressed with Morlan’s work on the project, saying, “I have been amazed with her talent since the beginning of this project. She began her design pre-pandemic and we were unsure when she would be able to start painting the mural once the university shut down in March. However, since the reopening she has been hard at work and is now making great progress.”

“As far as how that translates to doing a mural, I like working on large scale work as, to me, that helps enhance the experiential quality of a piece of art by fully immersing the viewer in the piece. In my digital work, I've essentially been able to create environments for viewers to walk around in. With murals, I like the permanence of them in that the space and the experiences you have in that space are completely changed,” she continued.

Moreo hopes that the project will be completed soon. He said, “Fingers crossed, the mural will be finished by the end of the semester. Once it is finished, I will begin constructing the new aquaponics system with the hope of having it up and running by the next spring semester.”