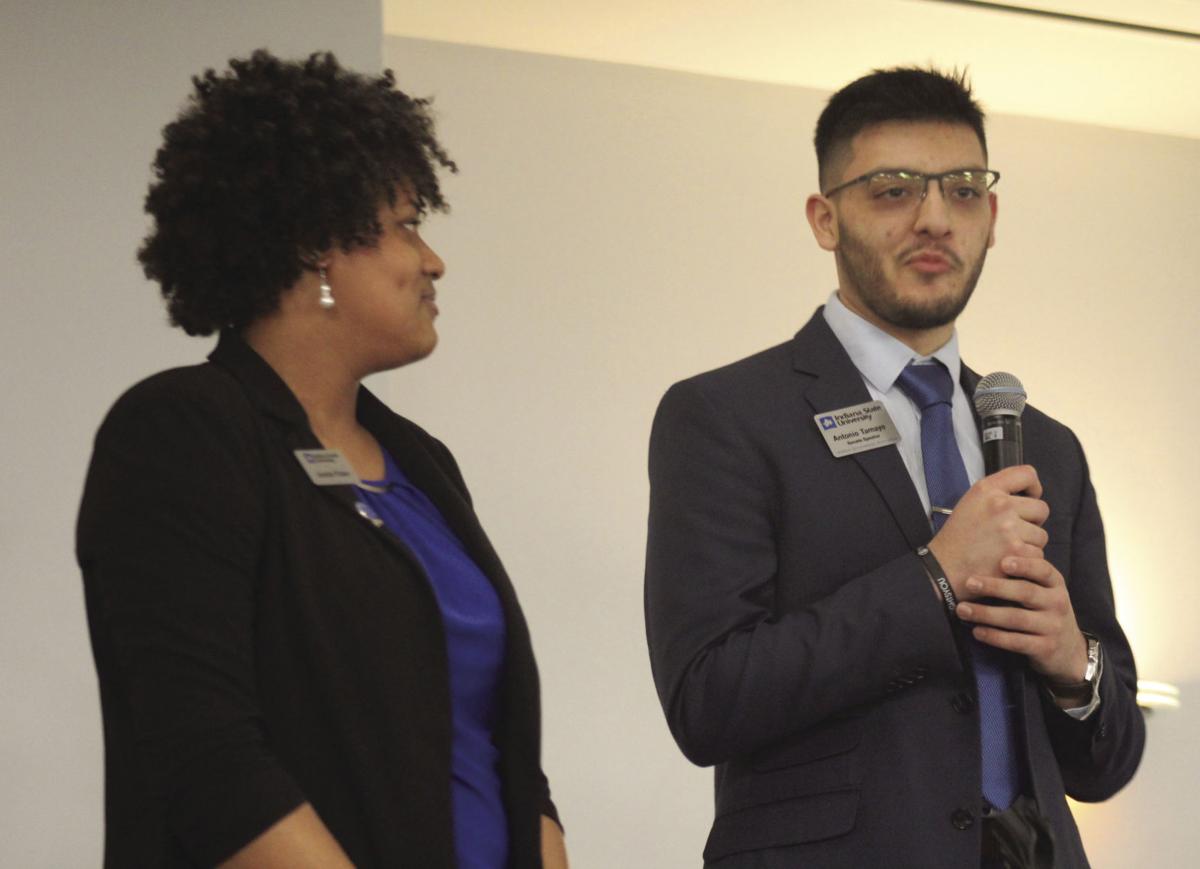 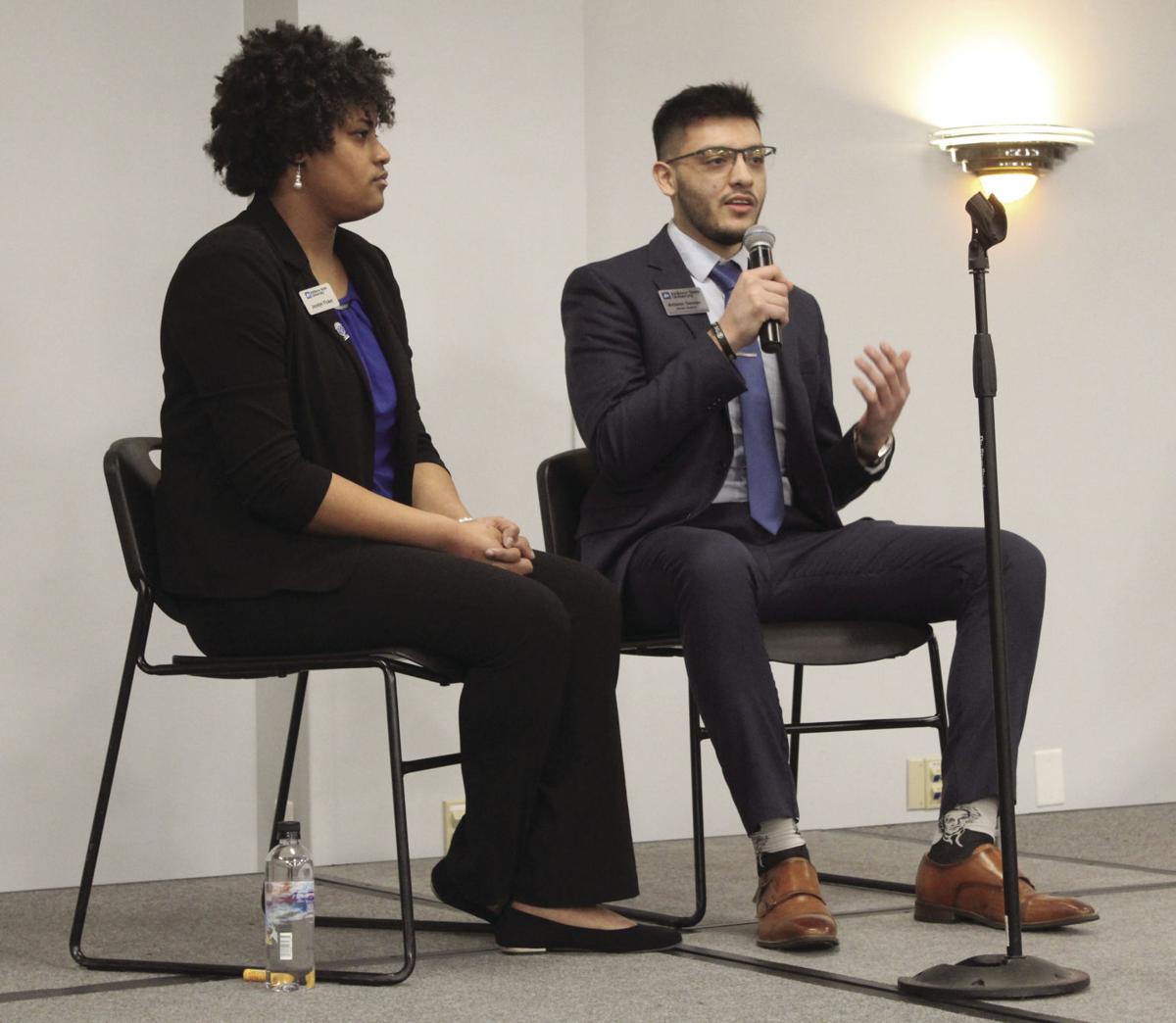 The winners of the SGA election were announced last week, concluding an exciting campaign dedicated to making ISU a better place. Newly elected president Antonio Tamayo and vice president Jocelyn Fluker have plenty of ways to achieve this.

“We ran on a really broad platform,” explains Tamayo, “We kept our platform broad so we would continually have something we could work to improve.”

Tamayo and Fluker have three main areas that they will focus on during their time as president and VP: student and community engagement, affordability and transparency.

“We want to act as liaisons between the student body and the university administration,” says vice president Fluker, “We hope we can better highlight student needs on a greater level.”

Tamayo adds, “Things you care about, we care about as well.”

Both Tamayo and Fluker are heavily involved on campus, and they want to encourage students to become involved as well. For them, it’s all about getting out of their comfort zone.

“I played club soccer, and I had never played soccer in my life,” Fluker jokes, “I did it because I wanted to put myself out there and take chances.”

Tamayo explains that college is what you make it, so no one should be afraid to get involved.

“I’ve served as an orientation leader, an RA and an Honors Council member,” Tamayo comments, “I decided that my college experience was going to be great, so I took steps to make it great.”

As minority students, Tamayo and Fluker want to give a greater voice to other minority students. Fluker explains that while campus is rather diverse, minority voices can easily become drowned out, often unintentionally.

“We want to help minority students achieve leadership positions,” she says, “Minority students like Antonio and I should feel comfortable voicing their needs and that they will be listened to. We hope our time in office will encourage students of all backgrounds to get involved.”

Diversity is a major theme of their campaign, playing into each aspect of their platform.

Fluker agreed, adding, “ISU is better than most schools about highlighting opportunities for minority students, but there’s still work to be done. We want to empower minority students to get involved and feel supported in doing so.”

Hundreds of thousands of dollars in scholarship money will go unawarded each year, money that is designated for minority students. Making students aware of these scholarships is a top priority for Tamayo and Fluker. Even if it’s just $500, Tamayo and Fluker want to encourage students to apply.

First responders get creative on the job during outbreak

“There is a ton of scholarship money that can help to make college affordable for students,” Tamayo comments, “A major reason I came to ISU was affordability, and I will work to connect students with scholarships that will allow them to attend college.”

Tamayo is a first-generation college student. He admits that college was initially intimidating, and that he hopes that a minority SGA president will help to attract other first-generation students.

“What I love most about ISU is the endless opportunities for students to get involved,” Tamayo adds, “There is something for everyone, but you have to be willing to get out of your comfort zone.”

While Tamayo and Fluker don’t have any concrete plans as of now, their first priority is to build a cabinet that is representative of the student body.

“Be on the lookout for executive position applications,” Fluker notes.

In the meantime, Tamayo and Fluker hope to be completely transparent with students.

“We want students to know who is making decisions, what those decisions are and why they are being made,” Tamayo explains, “Students are always free to come up to Jocelyn or I with suggestions or questions.”

Both Tamayo and Fluker asserted that the needs and interests of students will always be their top priority. After all, they say, the most successful colleges care about their students.

“We are a voice for the student body and any action we take will reflect that,” Fluker promises.

Tamayo and Fluker were well-supported throughout their campaign. Fluker explained that no one running ever put another candidate down or personally attacked anyone else.

“I think we all understood that each of us had the best interests of the students at heart,” Fluker comments, “I loved that everyone had equal opportunity to share their platform and I think we all felt respected.”

Tamayo and Fluker hope to reach students who didn’t vote for them to ensure them that they will be listened to and supported.